Legends of rugby league – including international coaches and many players who have won the sport’s biggest– are set to ‘walk & talk’ on a journey between Super League stadiums to raise awareness of the life-changing impact of serious injuries in the sport – and to raise money to support those most badly affected.

The event has been organised by the Mose Masoe Foundation, which was established firstly to support the Samoan international following the career-ending spinal cord injury which he suffered when playing for Hull Kingston Rovers last January, leaving him paralysed.

Mose still has no sensation or dexterity in his hands, can still walk only a few unaided steps and any brief activity leaves him shattered.

The centrepiece of the event is a rugby ball initially signed by Mose in Hull which has since travelled club to club in the Australian NRL, collecting signatures of all club captains.

Now back in the UK, it will be walked between Super League grounds, collecting all Super League club captain signatures to create the ultimate piece of modern day rugby league memorabilia.

Fans will be encouraged to join parts of the UK walk – which starts at St Helens tomorrow - at the various stages of the journey as the ball is carried from Lancashire to East Yorkshire.

They are also being urged to donate to raise vital funds for the Foundation, which will eventually support other rugby players who suffer life-changing injuries like Mose.

The aim is to secure 24,353 donations – one for each mile the ball will have travelled to return it into Mose’s hands on July 1,  when he will carry the ball out in front of the crowd at Hull KR’s televised clash with cross-city rivals Hull FC.

People can donate any amount through the Foundation’s Go Fund Me page at or make a donation between £5 and £20 via text.

Journey starts at St Helens and ends in Hull

The UK stretch of the journey is being entitled ‘It’s Time to Walk and Talk’, highlighting how opening up and talking about the impact of life-changing injuries can be just as important as learning to walk again.

In Mose’s own case, his first steps were widely celebrated and his smile suggested he was doing well, and it was only a year after his accident that he opened up about the dark days he suffered mentally, and admitted the level of support he required.

Ultimately, it was those conversations with friends and colleagues which led to the Foundation being formed.

The ball starts its UK leg tomorrow (Thursday, June 17) at St Helens. Mose’s first Super League club, where it will be signed by the captains of the Saints and the Warrington Wolves ahead of their televised Super League clash.

It will then walked to Wigan, with former Warriors and England full-back Shaun Briscoe and former Scotland coach, Steve McCormack, who is now Head of Welfare at Rugby League Cares, and Dave Rotheram of the RFL part of the first team.

The ball will then be handed over the following morning to a team including Sky Sports’ Brian McDermott, Terry O’Connor, Jenna Brooks and iconic commentator Eddie Hemmings, before arriving at Leigh, where Coronation Street star Mikey North, who plays the character Gary Windass will join the walk to Salford.

Sunday will see Hull KR stars George King, Adam Quinlan and Matty Parcell take over as the ball heads to Leeds and then Wakefield in a leg which will see legends of Rhinos and England, Jamie Peacock and Danny McGuire, take part.

The following day, as the ball leaves Wakefield and heads to Castleford, a Trinity trio of Chris Chester, Willie Poching and Tinirau Arona will help support the ball on its journey, before future Castleford coach Lee Radford joins with Hull FC, Leeds and Castleford legend Lee Crooks at the Mend-A-Hose Jungle on a leg which will take the ball into East Yorkshire, reaching Goole.

A team of Mose’s colleagues from Hull KR in coaching staff Tony Smith and Stanley Gene, alongside club legend Ben Cockayne, will ensure the ball arrives safely at Hull FC, before it is stored away and walked to Hull KR on July 1 when the Robins face Hull FC, where Combined Nations Team Manager and Doncaster chief executive Carl Hall will join up with Tony Sutton, of the RFL.

The ball will be walked onto the pitch by Mose and eventually auctioned off as the ‘ultimate piece of modern day rugby league memorabilia.’

Time to Walk and Talk

Mike Smith, Chairman of Trustees for the Foundation, says he hopes the event will raise awareness as well as vital funds, and thanked all who have agreed to take part.

He said: “Once again the sport of rugby league is coming out in force to support Mose and other seriously injured players and for that we are hugely grateful.

“We really want to spread a message about how important it is to firstly to create an environment where people who suffer bad times feel more willing to open up, talk and ask for the support they need, and secondly ensure the funds are in place to provide the specialist support required.

“That is what the Foundation is all about, and by supporting this walk either by taking part, coming to cheer people on, or of course by donating, people will be making a positive difference.”

For former Sky Sports Super League commentator Eddie Hemmings, it is an event he says he had ‘not a second’s doubt’ about taking part in.

“When I was told about this event and was asked if I would walk one of the legs I said yes straight away, even though I’m getting on a bit and may need carrying the last few miles,” he said.

“I think in Mose Mose and Rob Burrow our sport sadly has two tragic stories at the minute, but we also have two wonderful and hugely inspirational people who deserve the huge support the game is collectively showing them.

“Rugby League consistently shows its strength in coming together in times of adversity and it is wonderful to see so many current and former stars getting involved.

“Sadly our sport is one which carries the risk of serious injury, which thankfully don’t happen often, but when they do you need initiatives like the Foundation to be there for them. That is why everybody is happy to support Mose and his family, and of course others too.”

Mose said: “I’m really overwhelmed by the thought and effort which has been put in on both sides of the world to make this happen. To have the support once again of all the NRL and Super League clubs, their players and supporters is truly overwhelming.

“It will be so emotional to be handed the ball ahead of the derby game between Hull KR and Hull FC, knowing the effort that has been made to take it around the world collecting signatures, and the many miles people have walked.

“To walk out onto the field, in front of the fans, will be truly amazing. I have had amazing support from around the world, but the people in the city of Hull especially have shown me so much support and love it will be amazing, and of course extra special with the fans now back in the stands.”

The UK journey dates are as follows. 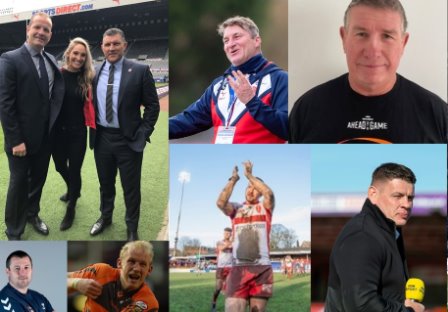 Find out how you can get involved and make a difference